A record year for containership demolitions in 2016 has helped suppress total fleet growth close to the rate for demand. To repeat that feat the scrapping record will need to be smashed again, and again.

There are multiple ways to measure the vitality of the container industry, from looking at port and trade volumes to carrier income and balance sheet statements. Another is to look at the average age of containership demolitions. Generally, the earlier that owners decide to cut short the life cycle of their steel assets the more downbeat they are of their future revenue earning potential.

So far this year there have been three cases of ships being scrapped just before they reach their 10-year birthday (a record), which before accounting for cash paid by the demolition yard for the reclaimed steel, implies a write-off of nearly 60% as containerships are normally depreciated over 25 years. 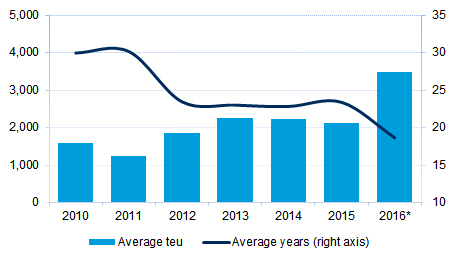 Note: *Data up to 7 November 2016 only
Source: Drewry Maritime Research

As of 7 November, a total of 151 ships have been sold for demolition in 2016 with an average age of 19 years (Figure 1). That is significantly lower than the average of 23 years recorded in each of the previous four years. It seems that more owners, particularly of the non-operating kind, are deciding that scrapping is the least bad option available; over chartering out ships at historically low (and loss-making) levels or paying for idling costs until a hoped-for shipping market recovery happens. 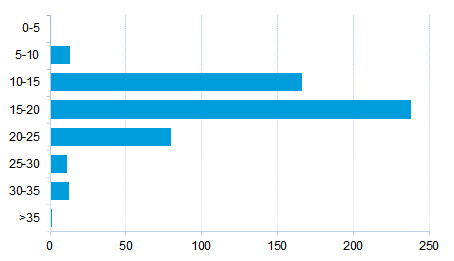 As well as being younger, the size of scrapped vessels is also rising sharply with the 2016 current average being 3,500 teu, up from just over 2,000 teu in recent years. The expansion of the Panama Canal has played a part in this upsizing of scrapped units, creating a surplus of unwanted “Panamax” ships of around 4,500 teu. The upgrade of many Asia to US East Coast via Panama services to 8,000 teu and above combined with the weakened state of many North-South trades that might previously have been able to accommodate the cascaded vessels, have left those ships without a home. 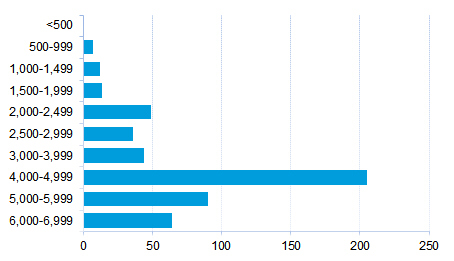 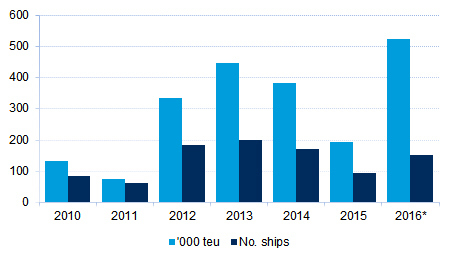 Note: *Data up to 7 November 2016 only
Source: Drewry Maritime Research

The rapid increase in demolitions has helped to bring the annual growth rates for global supply and demand closer together. Assuming that scrapping does continue at the current pace and after adding in the newbuild deliveries, the total containership fleet will have grown by just 1.8% at the end of 2016. That is only marginally higher than Drewry’s forecast for world port throughput growth at 1.3%. In 2015 the differential was much larger as supply grew by 8.4% versus the same 1.3% for demand, with the miss-match contributing to the collapse in freight and charter rates. 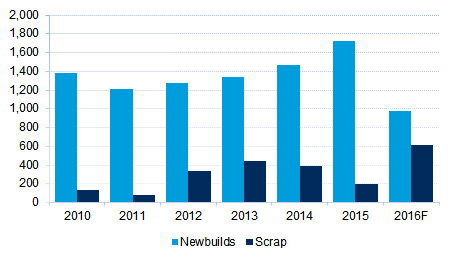 The reason why the closer global supply-demand balance in 2016 hasn’t seen either market appreciably recover is that it is not a universal trend as there remain significant imbalances in many big volume trade lanes.

Unfortunately for owners Drewry is not anticipating that demand will get much above 3% over the next two years so they will need to scrap even harder if they want to see supply growth fall into line. This is because much more new tonnage is scheduled to arrive over the next two years than in 2016. With nearly 3.2 million teu of new ship capacity scheduled for delivery – split roughly equally – in 2017 and 2018, to perfectly match supply growth with our demand forecasts will require that around 1 million teu will have to be scrapped in consecutive years. To achieve this, owners will have to look for ever younger and bigger ships to send to the demolition yards.

Figure 6: Share of scrapped containerships in 2016 by owner type 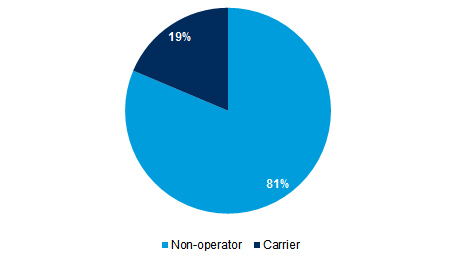 Figure 7: Share of scrapped containerships in 2016 by owner nationality 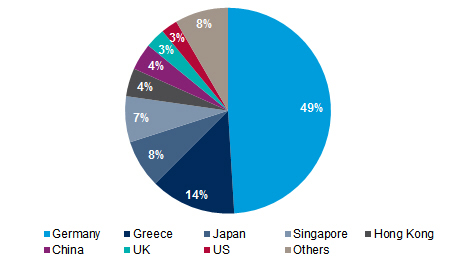 Financial difficulties at some non-operating companies may add to the demolitions pile. In September, Rickmers Maritime Trust declared that it was unable to repay $180 million in outstanding debt, due in March 2017. The company owns 16 ships ranging from 3,500 teu to 5,000 teu, with the oldest ship only 12 years old. In an effort to buy time, the Rickmers board is proposing a re-structuring of finances that would eventually give bondholders a share in the company. Soon after that news broke, the German KG Hansa Treuhand and its affiliated ship management company were forced to initiate insolvency proceedings for 15 containerships ranging between 3,800 teu and 6,500 teu. Fewer willing buyers on the second-hand market could force all, or some, of these vessels to be scrapped.

For other owners, there may well be some resistance to writing-off even larger shares of asset values, and with a market recovery in sight after the rush of new deliveries has passed come 2019 it could be that idling takes preference for those that are able to wait it out.