View Comments
The underlying profit in Q2 improved from USD 134m to USD 389m with Maersk Line contributing with an underlying profit of USD 327m. As a result of post-tax impairments of USD 732m related to Maersk Tankers and APM Terminals, the reported result was a loss of USD 264m.

The performance of A.P. Moller – Maersk in Q2 was mainly driven by a profitable Maersk Line due to continued recovery in the container market and focus on restoration of profitability. Full-year guidance is reiterated for 2017, despite an expected negative financial impact of USD 200-300m in Q3 from the recent cyber-attack.

“Maersk Line is again profitable delivering in line with guidance, with revenue growing by USD 1bn year-on-year in the second quarter. The profit was USD 490m higher than the same quarter last year, based on higher rates,” says Søren Skou, CEO of A.P. Moller – Maersk.

“Focus for the oil and gas related businesses in Energy remain on optimising performance and exploring new business models to strengthen resilience under the current market conditions,” Søren Skou emphasizes.

In the end of June, A.P. Moller – Maersk was hit by the malware “Not Petya” where system shutdowns resulted in significant business impact especially within the container business. Søren Skou elaborates:
“In the last week of the quarter we were hit by a cyber-attack, which mainly impacted Maersk Line, APM Terminals and Damco. Business volumes were negatively affected for a couple of weeks in July and as a consequence, our Q3 results will be impacted. We expect the cyber-attack will impact results negatively by USD 200-300m.” 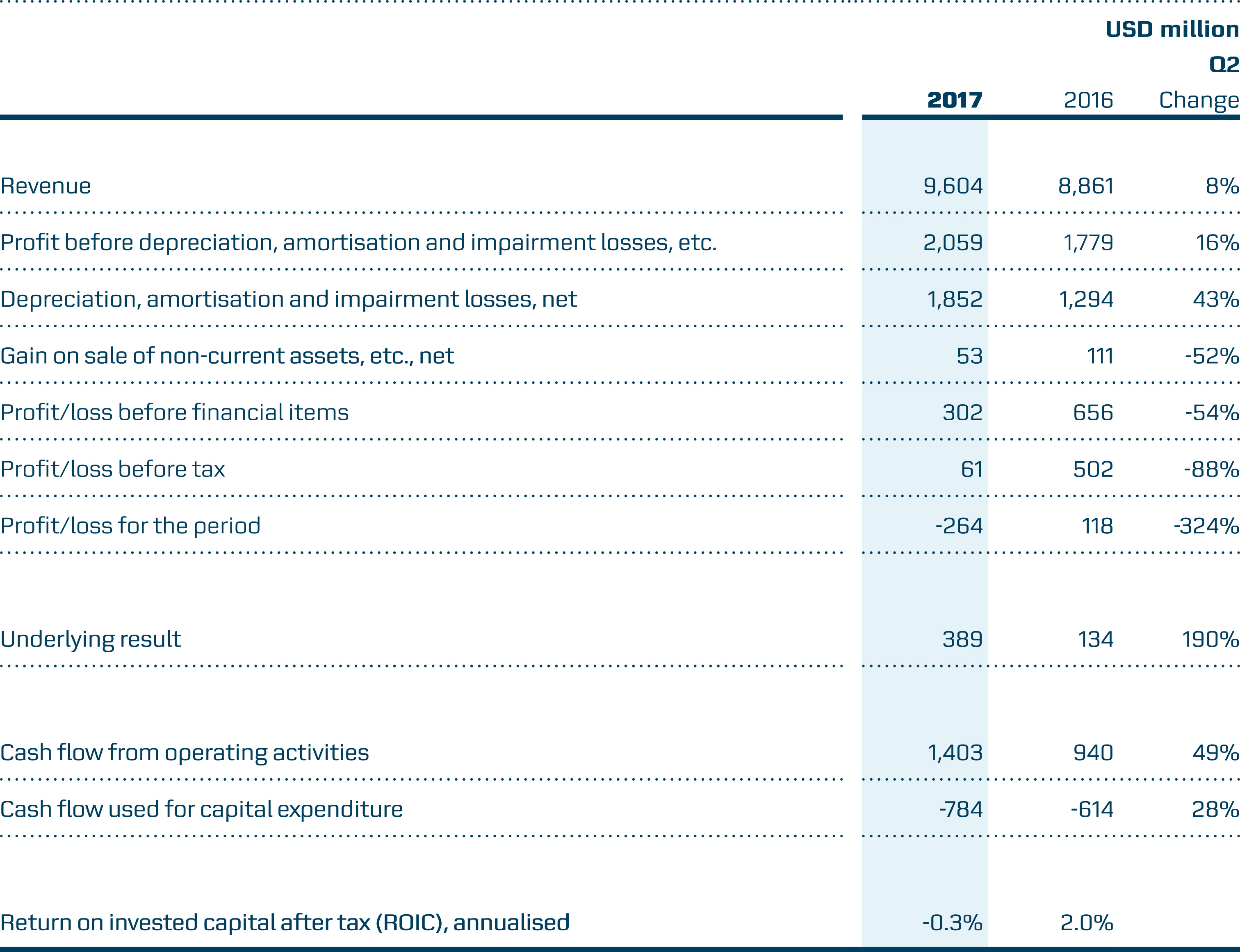 TRANSPORT & LOGISTICS
Transport & Logistics is progressing towards operating as one integrated division, and delivering the expected synergies estimated to create a ROIC improvement of two percentage points by the end of 2019. Maersk Line’s volume growth of approximately 7-8% (equity weighted) at APM Terminals and the stronger results reported by Maersk Container Industry are examples of those synergies.
The announced acquisition of Hamburg Süd is progressing as planned. The transaction remains subject to regulatory approval, with an expected closing in Q4 2017. The announced agreement to divest Mercosul Line will facilitate the authority approval process in Brazil.

Maersk Line reported a profit of USD 339m (loss of USD 151m) with a positive ROIC of 6.7% (negative 3.0%). The underlying result was a profit of USD 327m (loss of USD 139m). Market fundamentals continued to improve in Q2 as demand growth of 4% outgrew nominal supply growth of 1.4%. The improvement in market fundamentals in past quarters has started to reflect in the freight rate, which increased 22% compared to Q2 2016 and 7.6% compared to Q1 2017. Freight rates increased by 36% on East-West trades and 17% on North-South trades. Transported volumes increased by 1.7% compared to Q2 2016. Volume grew on headhaul by 5.2%, however, offset by a decrease on backhaul by 5.6% as backhaul cargo was less attractive on some trades.

Svitzer reported a profit of USD 19m (USD 24m) and a ROIC of 5.8% (7.8%), impacted by USD 12m impairment on 11 idle vessels marketed for sale due to fleet optimisation and by USD 6m impairment on investment in Ardent, the 50% owned salvage company. The underlying profit amounted to USD 33m (USD 23m), due to a USD 10m increase in deferred tax asset.

ENERGY
Energy is progressing as planned on finding structural solutions for its businesses before the end of 2018.

With an 8.7% higher oil price of USD 50 per barrel vs. USD 46 per barrel in Q2 2016, Maersk Oil delivered an underlying profit of USD 184m (USD 130m). The result was also positive impacted by lower costs and one-off income totaling of USD 66m related to tax and provisions. The result was negatively impacted by lower entitlement production primarily in Qatar, where cost reduction, unplanned shutdowns and the higher oil price led to fewer barrels for cost recovery, and lower year-on-year production from mature assets in the UK. The exit from Qatar by mid-July progressed as planned. The economic finalisation of the exit is still subject to review; however, Maersk Oil does not expect any adverse impact from this.

Maersk Supply Service reported a loss of USD 10m (loss of USD 106m) and a ROIC of negative 5.4% (negative 24.0%). The result for Q2 2016 was negatively impacted by an impairment of USD 97m. The underlying loss was USD 11m (loss of USD 8m), due to the overcapacity in the global offshore industry. Despite the subdued market outlook, Maersk Supply Service is making good progress with its newly launched integrated solutions strategy adding another contract. Maersk Supply Service will project manage the complete towing, mooring installation and hook up service scopes for Maersk Oil’s Culzean project in the British sector of the North Sea.

GUIDANCE FOR 2017
A.P. Moller – Maersk’s expectation of an underlying profit above 2016 (USD 711m) is unchanged despite expected negative impact from the June cyber-attack. Gross capital expenditure for 2017 is still expected to be USD 5.5-6.5bn (USD 5.0bn).

The guidance for 2017 excludes the acquisition of Hamburg Süd.

Transport & Logistics reiterates the expectation of an underlying profit above USD 1bn, despite expected negative result impact from the June cyber-attack estimated at a level of USD 200-300m, of which the majority relates to lost revenue in July. The vast majority of the impact of the cyber- attack was in Maersk Line.

Maersk Line reiterates the expectation of an improvement in excess of USD 1bn in underlying profit compared to 2016 (loss of USD 384m) mainly due to improvements in freight rates and partly increasing volumes. Global demand for seaborne container transportation is still expected to increase 2-4%, but in the upper end of the range.

Energy maintains an expectation of an underlying profit around USD 0.5bn, with Maersk Oil being the main contributor.

SENSITIVITY GUIDANCE
A.P. Moller – Maersk’s guidance for 2017 is subject to considerable uncertainty, not least due to developments in the global economy, the container freight rates and the oil price.

A.P. Moller – Maersk’s expected underlying result depends on a number of factors. Based on the expected earnings level and all other things being equal, the sensitivities for the rest of 2017 for four key value drivers are listed in the table below: