View Comments
, South Korea’s biggest sea carrier, said it will post losses through the first half of 2018 as the container-shipping industry attempts to recover from Hanjin Shipping Co.’s bankruptcy and years of excess capacity.

As a hedge against adverse conditions plaguing shipping, Hyundai Merchant has initiated talks to invest in box terminals in Southeast Asia, Chief Executive Officer Yoo Chang-keun, 64, said in an interview Monday. Once the company begins to turn around to profit, Hyundai Merchant plans to order new ships to meet new emission rules scheduled to take effect at the end of the decade.

“This year will be the year to strengthen our financials,” Yoo said in his office in Seoul. “We are targeting to make an operating profit in the third quarter of next year. By early next year, we expect much of the overcapacity in the market will be resolved.”

Hyundai Merchant, whose accumulated operating losses have exceeded $2 billion since 2011, is counting on a recovery in freight rates as a spate of mergers globally helps pare capacity and prevents rivals from undercutting each other. The company agreed to a tie-up with the world’s biggest shipping alliance led by A.P. Moeller-Maersk A/S in December and is buying overseas terminal assets, filling a gap left by Hanjin, which is set to be declared bankrupt next week by a Seoul court.

“There appears to be a consensus that the industry won’t be able to sustain with the level of freight rates we saw last year,” Yoo said. “We are cautiously expecting rates this year to recover.” 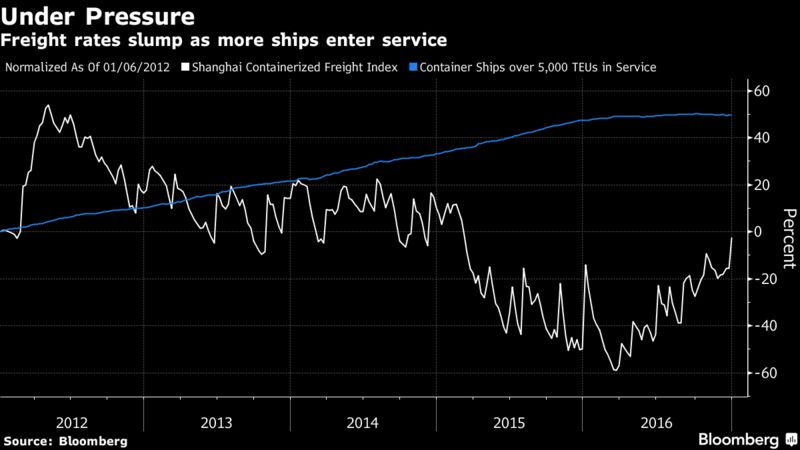 Shares of the company fell 1.2 percent to 7,990 won on Tuesday in Seoul, the biggest drop in two weeks. They have declined 53 percent in the past year, compared with an 11 percent gain in the benchmark Kospi index.

While Hanjin collapsed last year after credit stopped flowing, Hyundai Merchant managed to stay afloat by revamping its debt, selling assets, adjusting charter rates on leased vessels and extending the maturity of bonds. The measures won financial support from state-owned Korea Development Bank, which is now its biggest shareholder with a stake of 14 percent.

Following the restructuring, Hyundai Merchant’s debt-to-equity ratio is about 186 percent, down from as high as 5,000 percent, Yoo said, adding the company will take advantage of the government’s 6.5 trillion won ($5.7 billion) financial package designed to help Korean shipping companies tide over the crisis.

As part of the aid program, the government said in October that it plans to double the size of a fund to help companies order vessels — bulk carriers, tankers and box carriers — to $2.4 billion.

While Hanjin’s bankruptcy has instilled fear among others and promises to buoy freight rates, the risk of a trade war may pose challenges to any recovery, according to Drewry Financial Research Services Ltd.

“We continue to look for negative surprises,” Drewry said in a report last month. “The challenge is continued anti-trade sentiment and rhetoric stemming out from the U.S., and a resultant escalation into a full-blown trade war.”

While there are some concerns over trade protectionism, a shift in manufacturing won’t happen overnight, though there could be some impact on shipping, Yoo said.

Investing in terminals will help cut the cost of moving cargo at ports, which makes up for about 30 percent of total expenses, said Yoo, adding last year was the worst he’s seen in his shipping career spanning three decades.

Hyundai Merchant bought a 20 percent stake in Total Terminals International LLC, which operates in Long Beach, California, for $15.6 million from Mediterranean Shipping Co. The Korean company is also in talks to firm up the terms to buy a terminal in Spain, of which 25 percent is owned by Hanjin Shipping, after being selected as the preferred bidder.

Hyundai Merchant plans to order new vessels that will comply with stricter sulfur emissions rule expected to take effect around 2020, Yoo said. While the company hasn’t finalized on how many it plans to order, Yoo said that typically five to six ships are needed for the service loop between Asia and the U.S., and about 10 for Asia-Europe trade.