Whether the reds or blues win the US elections, international trade relations are destined to sour, dragging container prospects down with them.

As the US presidential election barrels along at full speed towards it crescendo on 8 November, US containerised imports and exports look set to take a beating whichever candidate the electorate backs. Both presidential candidates have been vocal and resolute that domestic trade is to be favoured over international trade, which will ultimately impact on the container trade serving North America. Republican candidate Donald Trump would tear up existing trade agreements, while Democrat candidate Hillary Clinton is against the ambitious Trans-Pacific Partnership (TPP) which is currently awaiting US congressional approval. Trump has also proposed imposing tariffs on US imports, which could set in motion retaliatory tariffs from other nations on imports of US goods; both of which would be harmful for the nation’s container trade. 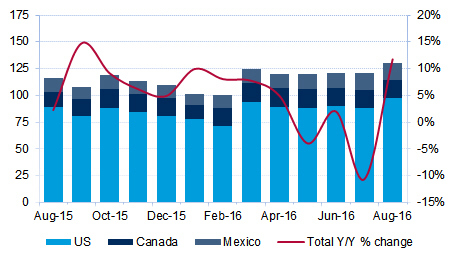 But these downbeat prospects for future US container trade have not dented current optimism as yet. Westbound Mediterranean to North America traffic rose by 10.2% month-on-month in August, with growth almost entirely attributable to a 9,000 teu increase in US imports. Year-on-year growth is just as stellar at 11.7%. The favourable US dollar to euro exchange rate in August supported this growth with Mediterranean exports appearing more financially attractive. 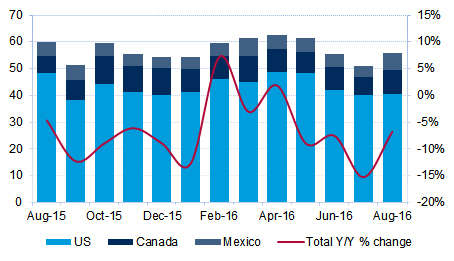 Eastbound North American to Mediterranean traffic also recorded gains but not to the same extent as the westbound trade, rising by 9.8% to 56,000 teu in August. However, this is a drop of 6.8% y/y, reflecting the reversed unfavourable exchange rate. That said, the euro has been on an upward track since August which may turn the trade back in favour of the eastbound services by the next review. 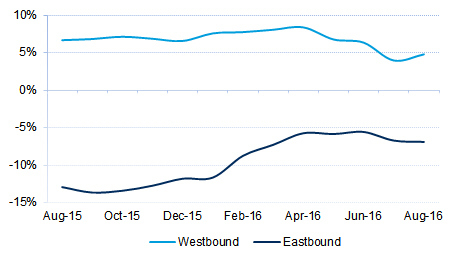 The rolling average of traffic growth confirms the reversal of exchange rate-related fortunes for the eastbound trade, with westbound growth at 4.7%, just as eastbound traffic slipped 6.9%. Eastbound trade growth continues to sit in negative territory, albeit that the y/y declines in 2016 have been less substantial than in 2015. 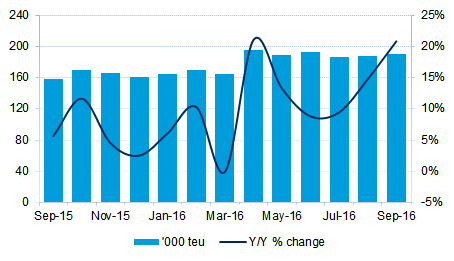 Capacity on the westbound service continues to climb, up 1.8% m/m and 20.8% y/y. MSC’s upsizing of ships on its US West Coast-Mediterranean service, connecting through the Panama, could well support this growth further in October’s figures. The line is replacing the 4,000-5,000 teu vessels on its California Express service with 9,000+ teu neo-Panamaxes. Three 9,000+ teu ships have already joined the service. 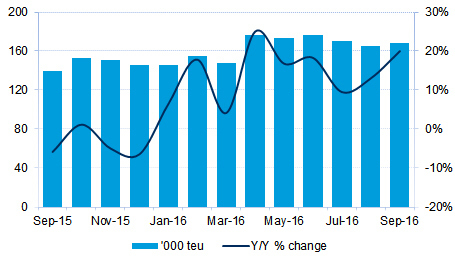 Eastbound services are also experiencing capacity growth with an additional 3,065 teu entering into service in September, a rise of 1.9% m/m and 20.1% y/y. While no change is expected until operations begin in April 2017, US regulatory approval of the OCEAN Alliance could shake up capacity on this trade in the near future. Proposed by CMA CGM, Cosco Evergreen and OOCL, the alliance covers connections between the Mediterranean and the US, in addition to other trades servicing the US. The US Federal Maritime Commission (FMC) is the first main competition authority to formally approve the proposed alliance. According to the agreement filed with the FMC, members plan to kick-start the alliance with 175 container ships of between 4,200-18,000 teu in the US-related trades, serving all destinations. 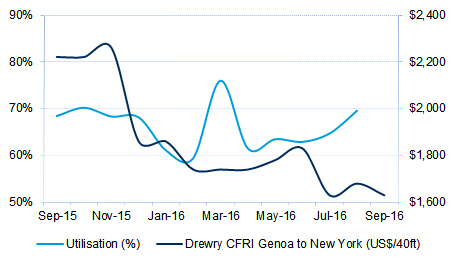 Looking at the more immediate picture, climbing traffic and capacity in August worked in the westbound trade’s favour as utilisation ticked up to 70%, returning to the seventies for the first time since March 2016. Freight rates initially followed, increasing by $50/40ft in August, but the gains were reversed in September as the all-in rate charged by forwarders for spot cargo from Genoa to New York slipped back to $1,830/40ft, according to Drewry’s Container Freight Rate Insight. 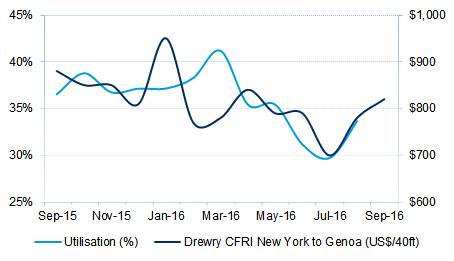 Eastbound utilisation made more clear cut gains, but from a much lower base. In August, utilisation stood at 34%, up from 30% in July, while the all-in rate charged by forwarders for spot cargo from New York to Genoa rose $120/40ft from July to September.

US container terminals see strength in this trade going forward. MOL’s TraPac has confirmed an agreement with Port of Oakland to virtually double its marine terminal size at the port. It will lease an additional 57 acres and two vessel berths on the Port’s Outer Harbor, strengthening TraPac’s position as the second-largest terminal operator in Oakland. TraPac currently handles 20% of the containerised cargo moving through the Port of Oakland, and manages two vessel berths and 66 acres of land. Under the new agreement, it would have four berths and 123 acres with much of that additional land used for cargo handling to cater to growing volumes. But the spectre of Hanjin is still never far away, despite there being only a fraction of the chartered fleet left for redelivery. In the port arena, MSC is in talks to take over Hanjin Shipping’s 54% stake in Long Beach’s Total Terminal at Pier T. MSC already controls 46% of this terminal via sister company TIL. If the deal goes ahead, MSC will likely shift the calls from its upsized California Express to Total Terminal as its other LB terminal, SSA Terminal Long Beach at Pier A in which it has a 50% share, cannot accommodate the larger ships.

At the Mediterranean end of this trade, development of Tanger-Med’s new terminal is pushing ahead with confirmation that operator APM Terminals has ordered 12 ultra-large remote-controlled ship-to-shore gantry cranes and 32 automated rail-mounted gantry cranes for the terminal. This will be the operator’s second terminal at the hub and once open in 2019, the new terminal will nearly double the capacity of Tanger-Med from around 3.50m teu today to around 6.50m teu, and it will be able to service containerships of up to 20,000 teu.

Notes: *Based on effective capacity after deductions are made for deadweight and high-cube limitations and then again for out-of-scope cargoes, ie. those relayed to areas outside the range. Where relevant,operational capacities have also been adjusted for slots allocated to wayport cargoes. Data subject to change
Source: Drewry Maritime Research